Renaud Laplanche spent ten years building LendingClub. In the process, he created an industry from scratch. Circumventing conventional banking channels for consumer credit began in 1996 when Chris Larsen started E-LOAN, which ultimately led to Prosper Marketplace. But LendingClub, which Laplanche founded in 2007, was and remains the poster child for the business of marketplace lending. The industry’s short history has been volatile, characterized by both triumphant hype and utter lack of confidence. 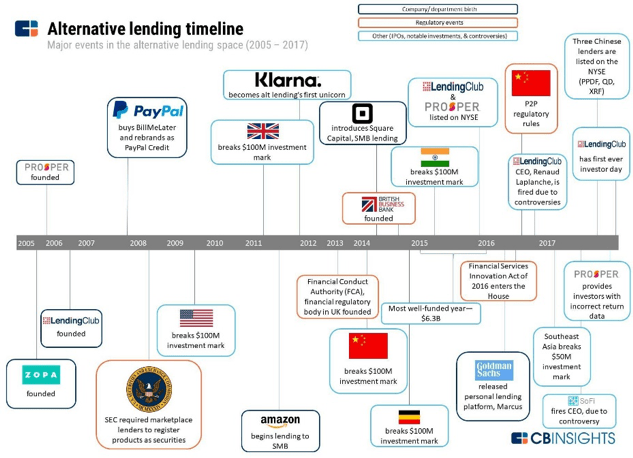 While LendingClub has struggled in the public markets since their late 2014 IPO, they have managed to propel their industry into significance, while rapidly expanding their share of the personal loan market to 10%.

After his well-publicized departure in May 2016, Laplanche got started on his next venture in a hurry. Just a few months later he started Credify, ultimately renamed to Upgrade, a company that bears a striking resemblance to LendingClub. In just two years Upgrade has raised $142 million in funding, while originating more than $1 billion in loans since August 2017.

With Upgrade, Laplanche has the opportunity to start fresh with the benefit of hindsight. The initial promise of LendingClub and their competitors was unbundling the banks. Now, to persist and grow, marketplace lenders have realized they need to rebundle, providing an array of bank-like services to better serve their end customers. This post explores what Laplanche is doing differently this time with Upgrade.

There has been a general recognition across many fintech businesses that marketplace business models aren’t enough. The mutually-beneficial arrangement of marketplace lending is a perfect example. Superior customer experience, expedited loan decision, quick receipt of funds, and lower operational costs without legacy infrastructure were the selling points. Charles Moldow famously called it a “trillion-dollar opportunity” in 2014.

He may still be right, but in order to realize the opportunity, marketplace lenders need to capture a larger, more regular share of borrower’s attention. Loans may be high-volume purchases, but they’re not high-frequency transactions. So when a platform like LendingClub facilitates a loan so someone can refinance their outstanding credit card debt, is there really a relationship with the customer there? Capital is provided, customer service is available, and monthly payments are made. That’s all there is to it.

Total addressable market (TAM) is frequently used to assess opportunity. A critical part of the TAM estimation process might have been overlooked in the early assessments of the alternative lending industry. The large numbers in the figure below reflect an alluring market that LendingClub, Prosper, Avant, Upstart, OneMain, Best Egg and others have attempted to capitalize upon.

The notion of a replacement cycle, which I’ll borrow from Michael Mauboussin, is an important consideration here, particularly in a high volume, low frequency transaction relationship such as consumer lending. Just because a borrower refinances their credit card debt with a loan from LendingClub, there’s little guarantee that all of the money spent on acquiring that customer will lead to future transactions with that customer. Yet, in order for these companies to succeed, the average revenue per user (ARPU) is going to have to rise through some combination of repeat customers and complementary services to deepen the relationship and create new revenue channels. 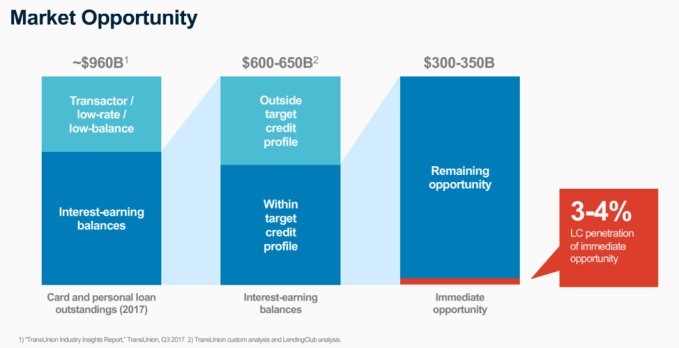 With this realization in mind, fintech players across the board have focused on deepening relationships with customers to drive sales and lower SG&A costs. Customer acquisition is a major component of the income statement for these companies. The more engagement a lender has with their end customer, the greater the chance they stand to not only be called upon when a borrower needs to borrow again, but ultimately pinpoint opportunities for product recommendations.

And that’s exactly what Upgrade is doing. In many ways, they’re quite similar to LendingClub. Upgrade offers personal loans between $1,000 and $50,000 over three-to-five-year repayment periods at rates competitive with major banks. LendingClub varies a bit in the principal amount offerings and APRs, but they essentially do the same thing. Loans are originated through WebBank, the partner bank that also works with LendingClub. Operationally, there’s a blockchain component for data remediation and security purposes. However, the extent and value of this application are unclear.

The notion of financial wellness is increasingly popular among consumer fintech companies, as well as incumbent financial institutions. It reflects a transition away from a purely transactional relationship to a fiduciary one, as we’ve also seen in the wealth management industry. The tricky thing about this is that although it may be the right thing to do, late fees and overdraft penalties make up a sizeable portion of traditional bank revenue.

Where Upgrade differs from LendingClub is in their customer engagement model. Upgrade provides several features to customers that resemble a conventional personal financial management (PFM) app. Their Credit Health service offers free advice and monitoring tools, personalized recommendations, and customized updates for individual credit scores and underlying rationale. Additionally, they offer a financial education tool open to the public called Credit Health Insights, which offers tips and tricks for debt management and financial wellness. At the surface, there’s little differentiation here. A free credit score is becoming table stakes for any financial institution, and personalized insights are to be expected. 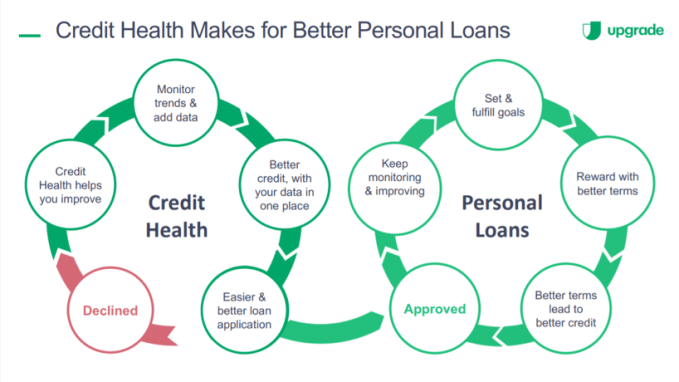 In Upgrade’s case, however, the framing of the dual service is compelling. Typically, online lenders only approve 10-15% of applicants. While the credit underwriting models are looking for the most compelling borrower profiles who will pay back their loans, the majority of interested borrowers are sent back to the drawing board.

A major focus of Upgrade is to build the credit of the other 85-90% of applicants who are typically rejected so that they improve their profile and obtain a loan in the future. Credit repair and financial wellness are underserved markets today, although companies like Bloom Credit are working to change the record. This product combination helps to unify the interests of Upgrade and borrowers, both approved and rejected.

At the LendIt Conference in 2017, Laplanche concluded his presentation with a reference to the Wright Brothers. He discussed how he was enamored with their ability to combine two things to create something entirely new, which in their case was “wheeling and flying.” A year later, he returned to LendIt with a new product release that borrowed from the innovation strategy of Orville and Wilbur.

Upgrade launched a first of its kind product, a Personal Credit Line, a hybrid of a credit card and an unsecured loan. Here’s how it works: customers get approved for up to $50,000 in credit, from which they can draw down as needed. They only pay interest on what’s borrowed, over the course of a 12-60-month timeframe. The interest rate is also fixed over the term of the loan. 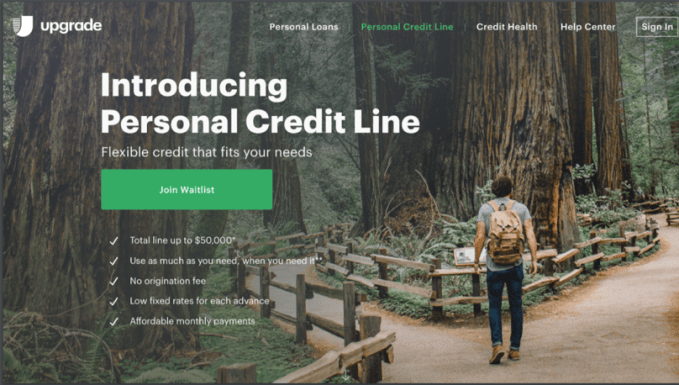 Upgrade’s Personal Credit Line, a hybrid of a personal loan and a credit card, Upgrade

The product is built on the premise that the level of innovation in the origination of consumer credit has been somewhat limited. Laplanche attempted to reinvent it once with the creation of LendingClub. In some ways, it worked. Personal loans originated by fintech lenders account for roughly a third of outstanding consumer loans according to Transunion. Now he’s trying to do it again.

When I first read the press release for the Personal Credit Line, I thought it was a very compelling way to expand the menu of options to qualified consumers. It puts more control in the hands of the borrower, so they can avoid the vicious cycle of consumer debt. I was also reminded of a comment made by Josh Brown, CEO of Ritholtz Wealth Management, after Wealthfront released their “Portfolio Line of Credit” product in April 2017. He said that while it might sound flashy, there’s nothing holding Schwab or Fidelity back from offering the same product tomorrow.

What’s so challenging about consumer-facing fintech companies is that customers are expensive to acquire, they’re difficult to keep, and products are easy to replicate. Providing a free credit score is easily accessible through a partnership with Equifax or Experian. It’s commoditized. The situation is similar with personal financial management tools. This Personal Credit Line seems awfully similar. What’s to stop Chase or Goldman’s Marcus from offering an identical product, perhaps with even better rates? U.S. Bank just launched a similar product, albeit for a different use case, called Simple Loan. It’s a $100 to $1,000 loan marketed as a payday lending alternative, with a roughly 20% lower interest rate than typical payday lender offers.

There is something to be said for being first to market, but ease of replication limits the defensibility of that position. There is a clear interest in an expansion into new products, which will continue to help Upgrade to differentiate the value proposition to consumers, and maybe one day small businesses. The unfortunate reality is that bigger players with an existing customer base and a lower cost of capital are on their tail. 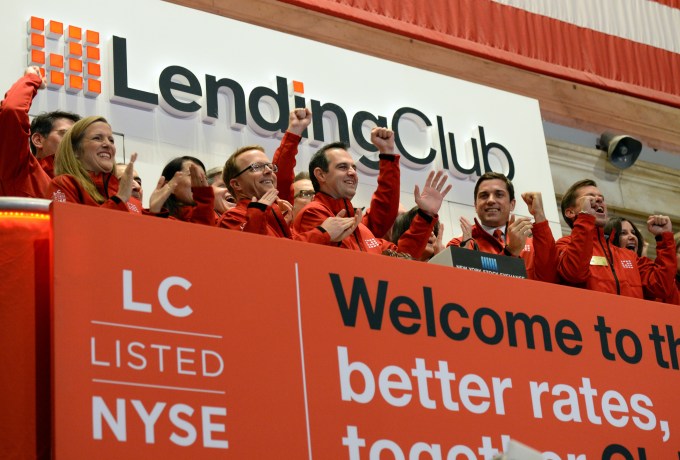 The real insight that distinguishes Upgrade from LendingClub is the profile of the users. On the supply side of the marketplace, Upgrade only welcomes institutional investors. LendingClub was, and still is, marketed to individuals and institutions.

The peer-to-peer model turned out to be a little too idealistic to serve as the foundation for a business. The concept of a marketplace is really attractive – the ability to invest in others, as cliché as that may sound, has a philanthropic twist to it that even implies a social good. Or, at the very least, an alignment of interests. Except interests aren’t aligned because of the mercurial nature of retail investors, which makes for unstable sources of capital.

LendingClub’s original business model, in the pure P2P form, was reliant on the ability to create a new asset class. The notion of investing in consumer credit may sound compelling, and return prospects may be even more appealing. But, you can’t bootstrap an asset class and base a business model around retail adoption. LendingClub had to solve for distribution of their service, as well as the dissemination of the broader concept of unsecured consumer lending as an asset class.

On Laplanche’s second go around with Upgrade, there’s no more promise of democratization of a new asset class. Instead, large multi-billion-dollar credit investors own the supply side of the marketplace. As a result, there’s a more stable capital base of institutional investors who know what they’re investing in and the reason why they’re investing in it.

What Laplanche did this time around was base his business model around stability. In this market it can pay to be a follower. LendingClub touts the notion that they have “brought a new asset class to investors,” but that education campaign came at a serious cost. It also invited boiler room-like sales behavior from competitors. Upgrade is stepping in after a decade of marketing to scale an untested industry to the masses. Fortunately, a lot of the work has already been done for them.

How Different Can You Be?

Upgrade is led by as experienced and forward-thinking of a leader as they come in the marketplace lending industry. They expect to originate over $2 billion loans in 2018 and hit profitability by year-end as well. They’re redefining convention when it comes to consumer credit products.

The question, however, remains: how long can the novelty last? Consumer fintech is fiercely competitive. It’s also increasingly occupied by incumbents with far lower costs of capital, large existing customer bases, and the ability to experiment in a way that a startup cannot. The unsecured consumer lending space has attracted mountains of capital in the past five years, but the opportunity is clearly defined. The number of lenders issuing more than 10,000 personal loans per year has more than doubled since 2011.

There’s a network effect component to marketplace lending businesses, particularly as lenders are able to maintain more connected relationships with consumers. But when it comes to standing apart from the rest of the pack, a differentiated product offering isn’t a very wide moat.