De Correspondent, a Dutch news organization aiming to “unbreak the news,” is planning to launch in the United States next year as The Correspondent. To fund its efforts, it’s hoping to raise $2.5 million from future readers.

Co-founder and CEO Ernst Pfauth (a former tech journalist who previously served as editor in chief at The Next Web) said this campaign is meant to test the waters of whether U.S. readers are interested in The Correspondent’s journalism. If it raises the money, it will launch in the U.S. next spring. If it doesn’t, it will reconsider those plans.

“We want there to be a critical mass that supports this,” Pfauth said. “We don’t want to launch, then see if enough people are interested.”

What the company has developed in the Netherlands, and what it’s hoping to replicate in the U.S., is a news organization with a direct connection to readers. For one thing, that means foregoing any ad revenue and relying entirely on readers for support. (Hence the crowdfunding campaign, where you can sign up by paying any amount you want.) It has a paywall, but any member can circumvent it and promote stories they think are important by sharing the individual links.

For another, it means treating readers as a key source for stories. In Pfauth’s view, by signing up as a “founding member,” you’re not so simply paying for a subscription, “You’re joining a cause. You not just giving us your money — though the money is essential — but you’re sharing your knowledge and spreading articles.” 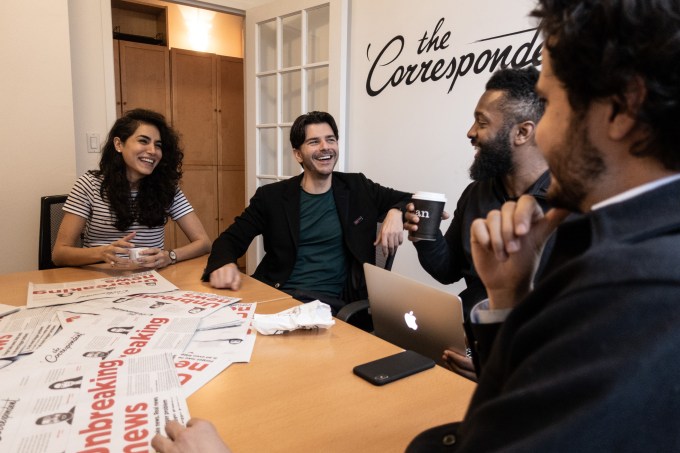 If that sounds a bit touchy-feely, here’s a concrete example: Last year, the organization broke the news that a videotape and related documents showed that Shell had detailed knowledge about the dangers of climate change as far back as 1991. And apparently it obtained the crucial material from a reader.

Pfauth said that in most cases, reporters at The Correspondent will share their story ideas with members as soon as they start working on it, which allows readers to share their perspectives as the story develops. That can mean talking to doctors about hospital bureaucracy, or interviewing refugees about their experiences. It also means that The Correspondent encourages its journalists to spend 30 to 50 percent of their time going through the comments section (which it calls the “contributions” section), where only members can post.

Pfauth argued that all of this is crucial for breaking out of the limited perspective of so many news stories, where journalists “only talk to people who get paid to talk to the press.” That description struck close to home — I’m someone who spends a lot of their time dealing with PR pros who, yes, get paid to talk to me, or to entrepreneurs who are trying to convince me to write about their companies.

So how do you get people to share their perspective in a less self-interested (or, in the case of comments, less rant-y) way? Pfauth pointed to tactics like making sure to verify the identity of sources and asking “really specific questions.” But he also said, “Most people are idealistic about the thing they really care about. They want the information to be good.”

“You are going to find examples of other newspapers who have done things like this, but it’s always incidental, it’s not routine,” he added. “In our organization, we have this systematic approach to every story that we cover.”

My friends are launching a journalism startup called The Correspondent. It’s the opposite of pivot-to-video: in-depth, critical, ad-free. They’re trying to get enough memberships in advance so they can hire a bunch of journalists. More here —> https://t.co/KMv96DS2mX

This strategy makes it harder to quickly cover breaking news, but in fact, Pfauth said that’s quite intentional.

“We tell our correspondents, please ignore the news — the news is about incidents,” he said. “Focus on the topics in your beat that are really changing our society.”

As part of this campaign, The Correspondent has also enlisted a number of high-profile “ambassadors” who support its mission. Those ambassadors include FiveThirtyEight’s Nate Silver, Wikimedia’s Jimmy Wales, director Judd Apatow, journalist, musician Roseanne Cash, journalist and investor Om Malik and others.