Target is no stranger to running startup accelerators. The company today operates its Target + Techstars program, the beauty-focused Target Takeoff, and the India-based Target Accelerator Program. Now it’s adding a fourth business accelerator to the mix with the launch of Target Incubator. The new program is aimed at Gen Z entrepreneurs and its only real require is that the businesses involved are doing some sort of good.

As Target puts it, the businesses simply need to be making things “better for people or the planet.”

That broad requirement could cover a range of businesses, including those with new product ideas, new technology, or new services. Target says these could be things that impact everything from how you get your groceries to greenhouse emissions.

The businesses themselves don’t have to be too far along, either. All Target is asking is the company has taken some steps to try to get traction, but the business itself doesn’t have to have already publicly launched. It just needs to be more than “an idea” and it needs to be established as a legal entity. The founders must also still retain majority ownership (51%+) to be considered.

The retailer says it will select eight businesses for the program, with up to two members per business directly participating in the new incubator.

These “Gen Z”-focused entrepreneurs will then participate in virtual programming one hour per week from late April through June 2019, followed by a two-month in-person incubator program at Target’s HQ in Minneapolis from mid July through early August 2019. 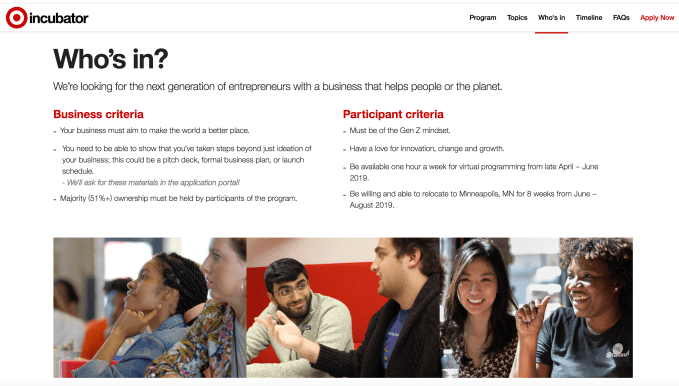 While there, they’ll receive mentorship from Target leaders and other businesses; participate in workshops, learning sessions and team-building events; be able to access subject matter experts across industries; and participate in other founder growth and development opportunities, Target says.

Applications opened up Monday and will close on October 29, with offers doled out on December 5, following a round of finalist interviews.

The businesses selected will also receive a $10,000 stipend from Target.

And the retailer will cover travel and accommodations for the interviews, plus travel and housing for those attending the eight-week program, which wraps with a demo day.

For Target, being involved with startups gives it the chance to invest in businesses at an early stage, which can ultimately benefit Target’s own bottom line, help it keep up with trends – especially those that draw in younger shoppers – and aid in its battle with Amazon.

The company has already established itself as a company that wants to work with emerging brands, through moves like its investment in online mattress company Casper, as well as through partnerships with digital-first brands like Bevel, Harry’s, Bark, Who What Wear, Native, Quip, Rocketbook, GIR, NatureBox, Hello, and others. It also last year acquired same-day delivery service Shipt, a still-emerging company that allowed it to get into the hot grocery delivery market.

Beyond working with new and digital-first brands, Target wants to reach businesses doing “good.” Today, many younger shoppers – those Target dubs as “Gen Z” – are driven to stores by more than just price. They often want to feel happy about their purchases because they believe in the company’s mission, or because it supports sustainable businesses, for example. Target Incubator will give the retailer a first look into those kinds of businesses now, too.