So I sent my mom that newfangled Facebook Portal

“Who am I going to be worried about? Oh Facebook seeing? No, I’m not worried about Facebook seeing. They’re going to look at my great art collection and say they want to come steal it? No, I never really thought about it.” That’s my 72-year-old mother Sally Constine’s response to whether she’s worried about her privacy now that she has a Facebook Portal video chat device. The gadget goes on sale and starts shipping today at $349 for the 15.6-inch swiveling screen Portal+, $199 for the 10-inch Portal, and $100 off for buying any two.

The sticking point for most technology reporters — that it’s creepy or scary to have a Facebook camera and microphone in your house — didn’t even register as a concern with a normal tech novice like my mom. “I don’t really think of it any different from a phone call,” she says. “It’s not a big deal for me.”

While Facebook has been mired by privacy scandals after a year of Cambridge Analytica and its biggest-ever data breach, the concept that it can’t be trusted hasn’t necessarily trickled down to everyone. And without that coloring her perception, my mom found the Portal to be an easy way to video chat with family, and a powerful reminder to do so.

As a quick primer, Portal and Portal+ are smart video screens and Bluetooth speakers that offer an auto-zooming camera that follows you around the room as you video chat. They include both Facebook’s own voice assistant for controlling Messenger, as well as Amazon Alexa. There’s also a third-party app platform for speech-activated Spotify and Pandora, video clips from The Food Network and Newsy, and it can slideshow through your Facebook photos while it’s idle. For privacy, communications are encrypted, AI voice processing is done locally on the device, there’s an off switch that disconnects the camera and mic and it comes with a physical lens cover so you know no one’s watching you. It fares well in comparison to the price, specs and privacy features compared to Amazon’s Echo Show, Google Home Hub and other smart displays.

When we look at our multi-functional smartphones and computers, connecting with loved ones isn’t always the first thing that comes to mind the way it did with an old-school home telephone. But with the Portal in picture frame mode rotating through our Facebook photos of those loved ones, and with it at the beck and call of our voice commands, it felt natural to turn those in-between times we might have scrolled through Instagram to instead chatting face to face. 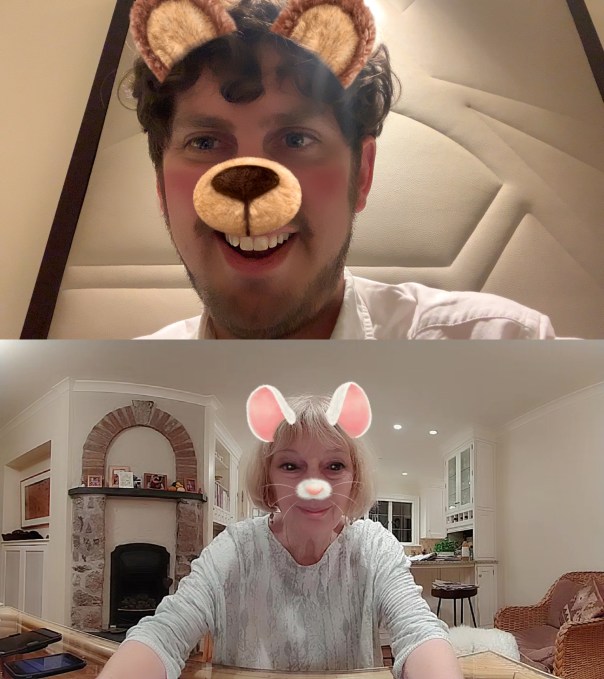 My mother found setting up the Portal to be quite simple, though she wished the little instructional card used a bigger font. She had no issue logging in to her Facebook, Amazon Alexa and Spotify accounts. “It’s all those things in one. If you had this, you could put Alexa in a different room,” the Constine matriarch says.

She found the screen to be remarkably sharp, though some of the on-screen buttons could be better labeled, at least at first. But once she explored the device’s software, she was uncontrollably giggling while trying on augmented reality masks as we talked. She even used the AR Storytime feature to read me a bedtime tale like she did 30 years ago. If I was still a child, I think I would have loved this way to play with a parent who was away from home. The intuitive feature instantly had her reading a modernized Three Little Pigs story while illustrations filled our screens. And when she found herself draped in an AR big bad wolf costume during his quotes, she knew to adopt his gruff voice.

One of the few problems she found was that when Facebook’s commercials for Portal came on the TV, they’d end up accidentally activating her Portal. Facebook might need to train the device to ignore its own ads, perhaps by muting them in a certain part of the audio spectrum as one Reddit user suggested Amazon may have done to prevent causing trouble with its Super Bowl commercial. 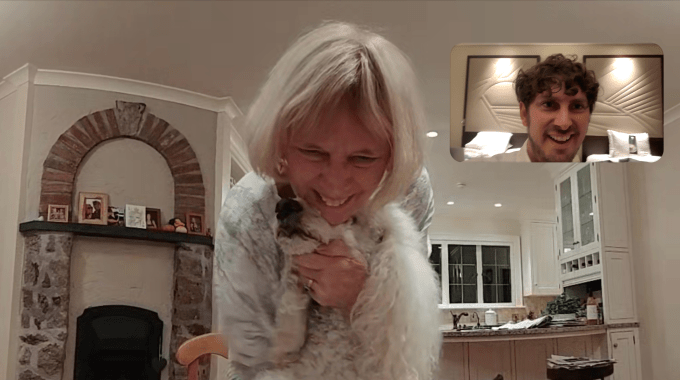 My mom doesn’t Skype or FaceTime much. She’s just so used to a lifetime of audio calls with her sister back in England that she rarely remembers that video is an option. Having a dedicated device in the kitchen kept the idea top-of-mind. “I really want to have a conversation seeing her. I think I would really feel close to her if I could see her like I’m seeing you now,” she tells me.

Convincing jaded younger adults to buy a Portal might be a steep challenge for Facebook. But perhaps Facebook understands that. Rather than being seemingly ignorant of or calloused about the privacy climate it’s launching Portal into, the company may be purposefully conceding to the tech news wonks that includes those who’ll be reviewing Portal but not necessarily the much larger mainstream audience. If it concentrates on seniors and families with young children who might not have the same fears of Facebook, it may have found a way to actually bring us closer together in the way its social network is supposed to.