The new iPhones have excellent cameras, to be sure. But it’s always good to verify Apple’s breathless onstage claims with first-hand reports. We have our own review of the phones and their photography systems, but teardowns provide the invaluable service of letting you see the biggest changes with your own eyes — augmented, of course, by a high-powered microscope.

We’ve already seen iFixit’s solid-as-always disassembly of the phone, but TechInsights gets a lot closer to the device’s components — including the improved camera of the iPhone XS and XS Max.

Although the optics of the new camera are as far as we can tell unchanged since the X, the sensor is a new one and is worth looking closely at.

Microphotography of the sensor die show that Apple’s claims are borne out and then some. The sensor size has increased from 32.8mm2 to 40.6mm2 — a huge difference despite the small units. Every tiny bit counts at this scale. (For comparison, the Galaxy S9 is 45mm2, and the soon-to-be-replaced Pixel 2 is 25mm2.) 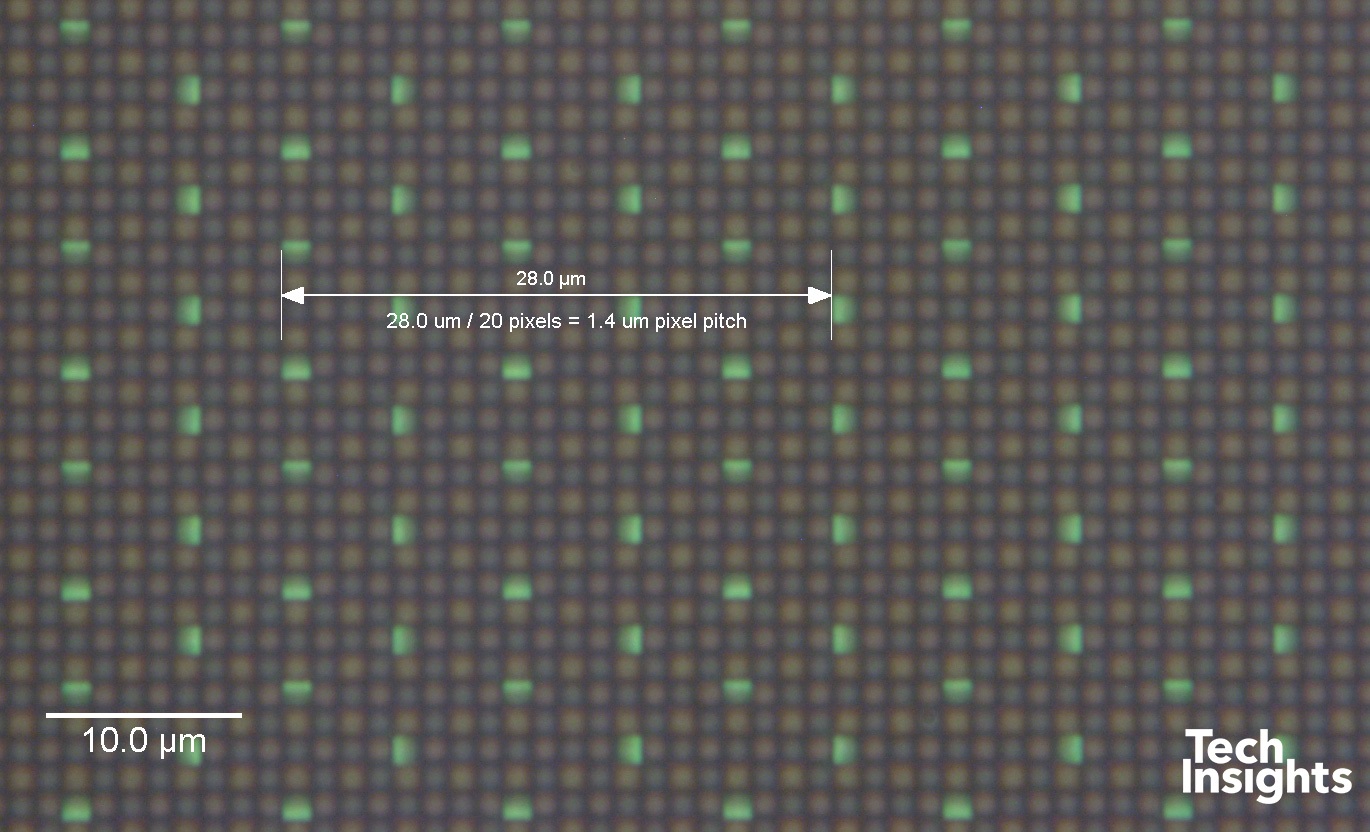 The pixels themselves also, as advertised, grew from 1.22 microns (micrometers) across to 1.4 microns — which should help with image quality across the board. But there’s an interesting, subtler development that has continually but quietly changed ever since its introduction: the “focus pixels.”

That’s Apple’s brand name for phase detection autofocus (PDAF) points, found in plenty of other devices. The basic idea is that you mask off half a sub-pixel every once in a while (which I guess makes it a sub-sub-pixel), and by observing how light enters these half-covered detectors you can tell whether something is in focus or not.

Of course, you need a bunch of them to sense the image patterns with high fidelity, but you have to strike a balance: losing half a pixel may not sound like much, but if you do it a million times, that’s half a megapixel effectively down the drain. Wondering why all the PDAF points are green? Many camera sensors use an “RGBG” sub-pixel pattern, meaning there are two green sub-pixels for each red and blue one — it’s complicated why. But there are twice as many green sub-pixels and therefore the green channel is more robust to losing a bit of information. 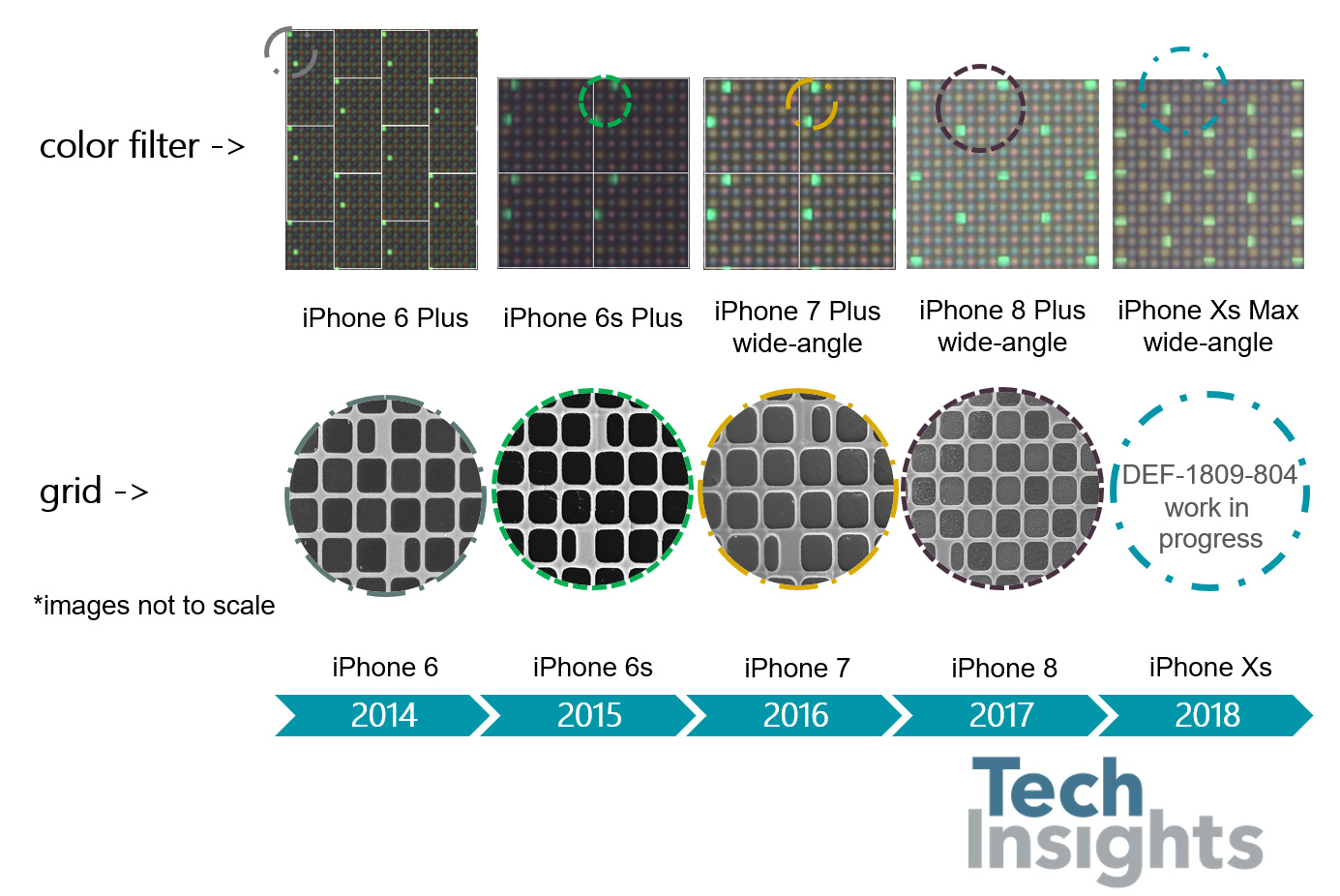 Apple introduced PDAF in the iPhone 6, but as you can see in TechInsights’ great diagram, the points are pretty scarce. There’s one for maybe every 64 sub-pixels, and not only that, they’re all masked off in the same orientation: either the left or right half gone.

The 6S and 7 Pluses saw the number double to one PDAF point per 32 sub-pixels. And in the 8 Plus, the number is improved to one per 20 — but there’s another addition: now the phase detection masks are on the tops and bottoms of the sub-pixels as well. As you can imagine, doing phase detection in multiple directions is a more sophisticated proposal, but it could also significantly improve the accuracy of the process. Autofocus systems all have their weaknesses, and this may have addressed one Apple regretted in earlier iterations.

Which brings us to the XS (and Max, of course), in which the PDAF points are now one per 16 sub-pixels, having increased the frequency of the vertical phase detection points so that they’re equal in number to the horizontal one. Clearly the experiment paid off and any consequent light loss has been mitigated or accounted for.

I’m curious how the sub-pixel patterns of Samsung, Huawei and Google phones compare, and I’m looking into it. But I wanted to highlight this interesting little evolution. It’s an interesting example of the kind of changes that are hard to understand when explained in simple number form — we’ve doubled this, or there are a million more of that — but which make sense when you see them in physical form.