Netflix’s internal hackathons have consistently produced fun and often silly hacks, from that “Netflixtendo” hack a few years ago that let you run Netflix on the original NES to the more recent “audiobook mode” that turned Netflix series into old-school radio shows by way of Audio Descriptions. This year’s hackathon doesn’t disappoint either, with new hacks that are both as goofy and interesting as in years past, including an AR and Face ID-powered hack that lets you navigate Netflix with just your eyes, another designed for “Sharknado” fans and more.

“Jump to Shark” lets viewers skip right to the good parts of the so-bad-it’s-good “Sharknado,” so they can watch the bloody action sequences with sharks, instead of having to sit through the movie’s actual plot. It’s pretty great, as the video shows.

The AR hack, Eye Nav, is fairly impressive, too.

The hack uses Apple’s ARKit and the technology that enables Face ID for tracking eye position and facial expressions. It tracks your eye position to move a pointer around the screen, then measures the time spent on the same area to trigger a “tap.”

If you want to dismiss a screen, you can just stick your tongue out.

While the resulting hack is definitely fun, there are also implications for accessibility use cases in the future.

The hack was produced in 24 hours, so it may not be stable enough for real-world use, but it’s definitely an interesting idea.

A third hack doesn’t involve Netflix, but rather the productivity software Slack, used by Netflix employees.

“LunchBot” connects co-workers who are too busy to go to lunch, by inviting them to eat lunch together — virtually, while in a Slack chat. The app also checks everyone’s calendars to make sure they’re free. 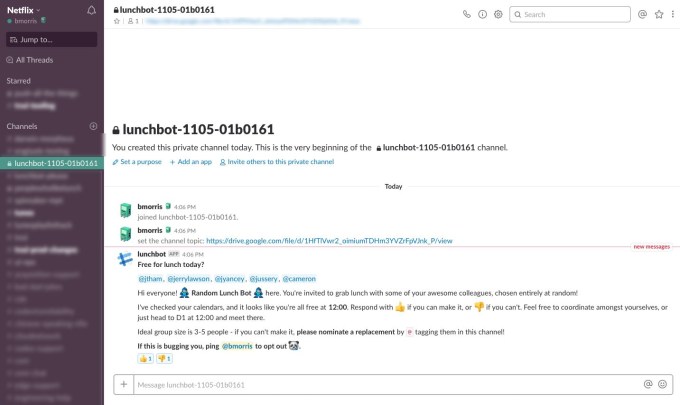 Other hacks this year included those for product improvements, enhancements to its internal tools and some that were just for fun. A few of these were showcased in its Hackday 2018 video, such as a map for locating studio production resources, an “easy login” system and a version of Animoji using Netflix characters.

But the larger goal of Netflix’s hackathon, as you can probably tell, isn’t necessarily about creating features that will later be productized (although, c’mon…Jump to Shark!), but they sometimes serve as inspiration for features further down the road, the company says.