When Microsoft acquired GitHub for $7.5 billion smackeroos in June, it sent some shock waves through the developer community as it is a key code repository. Google certainly took notice, but the two companies continue to work closely together. Today at Google Next, they announced an expansion of their partnership around Google’s new CI/CD tool, Cloud Build, which was unveiled this week at the conference.

Politics aside, the purpose of the integration is to make life easier for developers by reducing the need to switch between tools. If GitHub recognizes a Docker file without a corresponding CI/CD tool, the developer will be prompted to grab one from the GitHub Marketplace with Google Cloud Build offered prominently as one of the suggested tools.

Should the developer choose to install Cloud Build, that’s where the tight integration comes into play. Developers can run Cloud Build against their code directly from GitHub, and the results will appear directly in the GitHub interface. They won’t have to switch applications to make this work together, and that should go a long way toward saving developer time and effort. 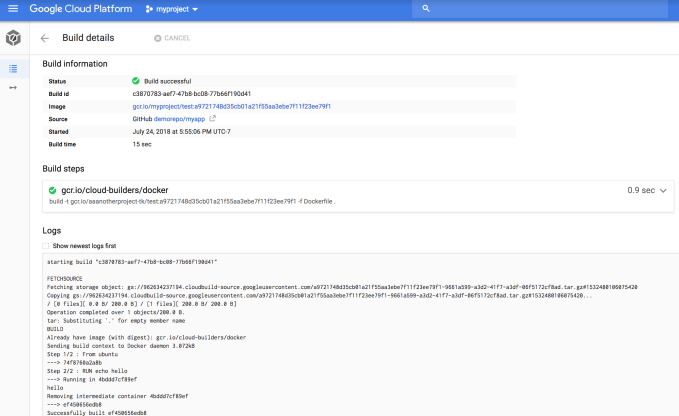 This is part of GitHub’s new “Smart Recommendations,” which will be rolling out to users in the coming months.

Melody Meckfessel, VP of Engineering for Google Cloud says that the two companies have a history and a context and they have always worked extremely well together on an engineer-to-engineer level. “We have been working together from an engineering standpoint for so many years. We both believe in doing the right thing for developers. We believe that success as it relates to cloud adoption comes from collaborating in the ecosystem,” she said.

Given that close relationship, it had to be disappointing on some level when Microsoft acquired GitHub. In fact, Google Cloud head, Diane Greene expressed sadness about the deal in an interview with CNBC earlier this week, but GitHub’s SVP of Technology Jason Warner believes that Microsoft will be a good steward and that the relationship with Google will remain strong.

Warner says the company’s founding principles were about not getting locked in to any particularly platform and he doesn’t see that changing after the acquisition is finalized. “One of the things that was critical in any discussion about an acquisition was that GitHub shall remain an open platform,” Warner explained.

He indicated that today’s announcement is just a starting point, and the two companies intend to build on this integration moving forward. “We worked pretty closely on this together. This announcement is a nod to some of the future oriented partnerships that we will be announcing later in the year,” he said. And that partnership should continue unabated, even after the Microsoft acquisition is finalized later this year.