Fabric, a personal journaling app that emerged from Y Combinator’s 2016 batch of startups, is relaunching itself as a Facebook alternative. The app is giving itself a makeover in the wake of Facebook’s closure of the Moves location tracker, by offering its own tool to record your activities, photos, memories and other moments shared with friends and family. But unlike on Facebook, everything in Fabric is private by default and data isn’t shared with marketers.

Instead, the startup hopes to build something users will eventually pay for, via premium features or subscriptions.

The idea for the startup came from two people who helped create Facebook’s core features. Co-founders Arun Vijayvergiya and Nikolay Valtchanov worked for several years at the social network, where Vijayvergiya built the product that would later become Facebook Timeline at an internal hackathon. He also worked on products like Friendship Pages, Year in Review and On This Day, while Valtchanov developed integrations between Facebook and fitness applications.

After leaving Facebook, both were inspired to work on Fabric because of their interest in personal journaling – and that became the key focus for the original version of the Fabric app. But while other journaling apps may offer a blank space for recording thoughts, Fabric automates the process by pulling in photos, posts from elsewhere on social media, places you visited, and more, and put those on its map interface. 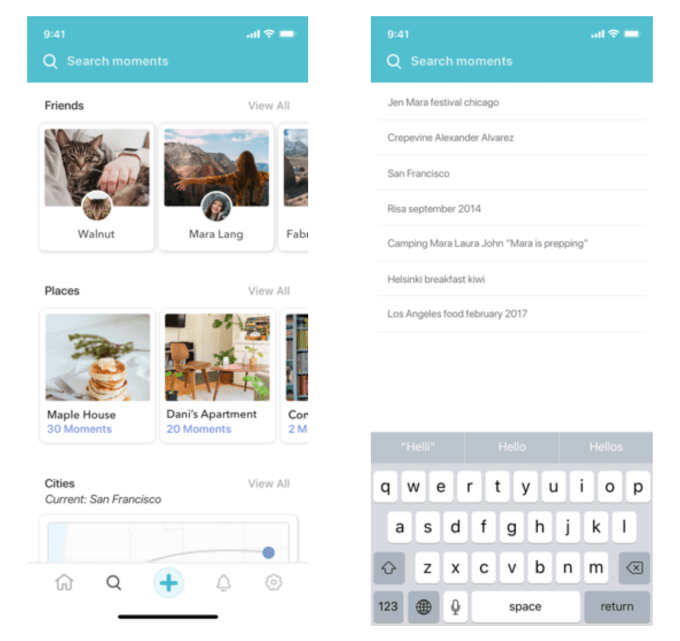 The longer-term goal is that Fabric users will be able to look back across their personal history to answer any kind of question about where they had been, what they did, and who they were with – but in a more private environment than what’s available on Facebook.

Facebook could have built something similar, but its focus has been more on how personal profile data could be useful to advertisers.

Despite numerous check-ins, posts where you tagged friends, shared photos and more, there’s still not an easy way to ask Facebook about that great Indian restaurant you tried last March, or who was on that group beach trip with you a few years ago, for example. At best, Facebook offers memory flashbacks through its On This Day feature (now available at any time via the Memories tab), or round-ups and collages that appear at various times throughout the year.

As a search engine for your own memories, it’s not that great.

This is where Fabric comes in. It will automatically record your activities, checking you in to places you visit, to which you can then choose to add friends.

While the idea of automatic location gathering may turn off a good number of users, the difference is that Fabric’s data collection is meant for your eyes only, unless you explicitly choose to share something with friends.

Fabric doesn’t use third-party software for its location system – it’s written in-house, so the data is never touched by a third-party. It also uses industry standard encryption for data transfer and storage, and login information is stored in a separate system from the rest of your data as an added precaution.

Notably, Fabric doesn’t plan to generate revenue by selling data or offering it to advertisers for targeting purposes. Instead, the company hopes users will eventually pay for its product – perhaps as a subscription or through premium upgrades. (It’s not doing this yet, however.)

“The whole motivation behind Fabric is that many meaningful parts of your life do not belong in the public sphere,” explains Vijayvergiya. “In order to be able to capture these moments, user trust is essential and is something we have baked into our company culture. Internally, we refer to ourselves as a ‘private-first’ company. Everything on Fabric is private by default. You have to choose to include friends in your moments. We don’t share any data with marketers, and we don’t intend to share personally identifiable information with advertisers,” he says.

Since its 2016 release, Fabric has been downloaded 70,000 times by users across 117 countries, and has seen 112 million automatic check-ins.

The new version of the app has been redesigned to be something users engage with more often, as opposed to the more passive journaling app it was before.

The app now offers an outline of your activities, which it also calls Timeline. Here, you can add people, photos and memorable anecdotes to those automated entries. You can jump back to any day to see your history with any person or place that appears on the Timeline.

You can also turn any moment into one you collaborate on with friends, by allowing others to add photos and comments. That is, instead of broad post to a group of so-called “friends” on Facebook, you share the moment with those who really matter. This isn’t all that different from how people use private messaging apps and group chats today – in order to share things with people that aren’t necessarily meant for everyone to see.

In addition, Fabric allows you to add your friends to the app, so you can be automatically tagged when you both spend time together in the real world. This also simplifies sharing because you won’t have to think about which posts should be shared with which audience.

For instance, Vijayvergiya says, “this means you can add your mom as a friend, and only share with her the moments you spend together in the same place.”

The most compelling feature in the updated app may not be check-ins or sharing, but search.

In Fabric, you can now search for past events in your life similar to how you search the web. That is, you could type in “restaurant rome 2017” or “camila los angeles birthday” and find the matching posts, Vijayvergiya suggests. And because you can import your Facebook, Instagram, and Camera Roll to Fabric, it’s now offering the search engine that Facebook itself forgot to build. (You can import your Facebook Moves history, too, ahead of its shutdown.)

Fabric’s search will also be available on the desktop web, where it’s currently in beta. 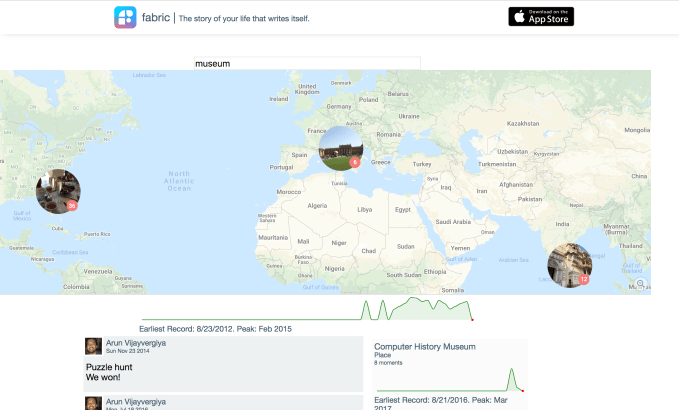 Fabric’s real challenger, as it turns out, may not be Facebook, though. It’s Google Photos.

Because of advances in image recognition technology, Google Photos (and some other photo apps) have built advanced search capabilities that let you pull up not places, things, people, and more, using data recognized in the image itself. Users can also share those photos with others, collaborate on albums, and leave notes as comments.

The difference is that Fabric offers import from a variety of sources and encourages journaling. But that may not be enough to attract a large user base, especially when automatic check-ins rely on the app’s use of background location which has some impact on battery life.