Google just one-upped Apple in a significant way by addressing a problem that’s plaguing U.S. cellphone owners: spam calls. The company’s new Pixel 3 flagship Android smartphone is first to introduce a new call screening feature that leverages the built-in Google Assistant. The screening service transcribes the caller’s request in real-time, allowing you to decide whether or not to pick up, and gives you a way to respond.

Despite the numerous leaks about Google’s new hardware, Call Screen and the launch of Duplex for restaurant reservations were big surprises coming from Google’s hardware event yesterday.

Apple has nothing like this call screening feature, only third-party call blocking apps – which are also available on Android, of course.

Siri today simply isn’t capable of answering phones on your behalf, politely asking the caller what they want, and transcribing their response instantly. It needs to catch up, and fast.

Call Screen, based on Google’s Duplex technology, is a big step for our smart devices. One where we’re not just querying our Assistant for help with various tasks, or to learn the day’s news and weather, but one where the phone’s assistant is helping with real-world problems.

In addition to calling restaurants to inquire about tables, Assistant will now help save us from the increasing barrage of spam calls. 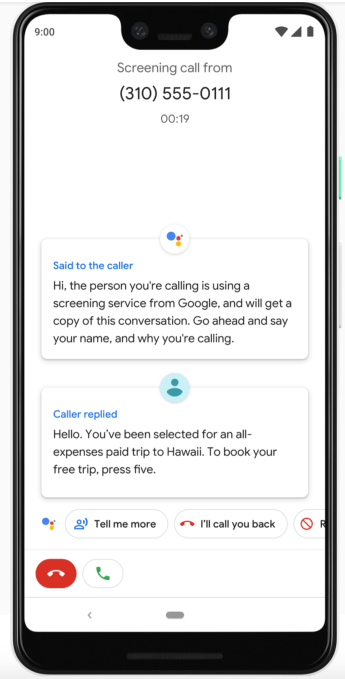 This is a massive problem that every smartphone owner can relate to, and one the larger mobile industry has so far failed to solve.

Nearly half of all cellphone calls next year will be from scammers. And their tactics have gotten much worse in recent months.

They now often trick people by claiming to be the IRS, a bank, government representatives, and more. They pretend you’re in some sort of legal trouble. They say someone has stolen your bank card. They claim you owe taxes. Plus, they often use phone number spoofing tricks to make their calls appear local in order to get recipients to pick up.

The national Do-Not-Call registry hasn’t solved the problem. And despite large FCC fines, the epidemic continues.

In light of an industry solution, Google has turned to A.I.

The system has been designed to sound more natural, stepping in to do the sort of tasks we don’t want to – like calling for bookings, or screening our calls by first asking “who is this, please?”

With Call Screen, as Google explained yesterday, Pixel device owners will be able to tap a button when a call comes in to send it to the new service. Google Assistant will answer the call for you, saying: “Hi, the person you’re calling is using a screening service from Google, and will get a copy of this conversation. Go ahead and say your name and why you’re calling.”

The caller’s response is then transcribed in real-time on your screen.

These transcripts aren’t currently being saved, but Google says they could be stored in your Call History in the future.

To handle the caller, you can tap a variety of buttons to continue or end the conversation. Based on the demo and support documentation, these include things like: “Who is this?,” “I’ll call you back,” “Tell me more,” “I can’t understand,” or “Is it urgent?”

You can also use the Assistant to say things like, “Please remove the number from your contact list. Thanks and goodbye,” the demo showed, after the recipient hit the “Report as spam” button.

While Google’s own Google Voice technology has been able to screen incoming calls, this involved little more than asking for the caller’s name. Call Screen is next-level stuff, to put it mildly.

And it’s all taking place on the device, using A.I. – it doesn’t need to use your Wi-Fi connection or your mobile data, Google says.

As Call Screen is adopted at scale, Google will have effectively built out its own database of scammers. It could then feasibly block spam calls or telemarketers on your behalf as an OS-level feature at some point in the future.

“You’ll never have to talk to another telemarketer,” said Google PM Liza Ma at the event yesterday, followed by cheers and applause – one of the few times the audience even clapped during this otherwise low-key press conference.

Google has the better A.I. Phone

The news of Call Screen, and of Duplex more broadly, is another shot fired across Apple’s bow.

Smartphone hardware is basically good enough, and has been for some time. Apple and Google’s modern smartphones take great photos, too. New developments on the camera front matter more to photography enthusiasts than to the average user. The phones are fine. The cameras are fine. So what else can the phones do?

The next battle for smartphones is going to be about A.I. technology.

Apple is aware that’s the case.

In June, the company introduced what we called its “A.I. phone” – an iPhone infused with Siri smarts to personalize the device and better assist. It allows users to create A.I.-powered workflows to automate tasks, to speak with Siri more naturally with commands they invent, and to allow apps to make suggestions instead sending interruptive notifications. 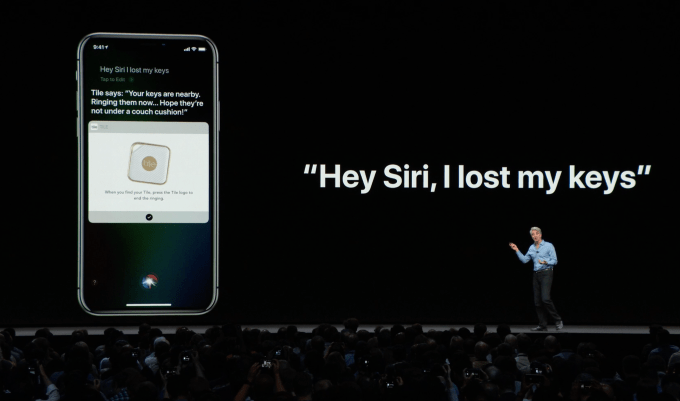 But much of Siri’s capabilities still involve manual tweaking on users’ parts.

You record custom Siri voice commands to control apps (and then have to remember what your Siri catch phrase is in order to use them). Workflows have to be pinned together in a separate Siri Shortcuts app that’s over the heads of anyone but power users.

These are great features for iPhone owners, to be sure, but they’re not exactly automating A.I. technology in a seamless way. They’re Apple’s first steps towards making A.I. a bigger part of what it means to use an iPhone.

Call Screen, meanwhile, is a use case for A.I. that doesn’t require a ton of user education or manual labor. Even if you didn’t know it existed, pushing a “screen call” button when the phone rings is fairly straightforward stuff.

And it’s not just going to be just a Pixel 3 feature.

Said Google, Pixel 3 owners in the U.S. are just getting it first. It will also roll out to older Pixel devices next month (in English). Presumably, however, it will come to Android itself in time, when these early tests wrap.

After all, if the mobile OS battle is going to be over A.I. going forward, there’s no reason to keep A.I. advancements tied to only Google’s own hardware devices.