Today, we are focused on SoftBank .

The Wall Street Journal and others reported that Masayoshi Son, the founder and CEO of SoftBank, will take into account the killing of Saudi Arabian journalist Jamal Khashoggi when considering whether to receive additional investment from Saudi Arabia in future Vision Funds. Saudi Arabia is the largest investor in the current Vision Fund, having pledged $45 billion of the $98 billion fund.

The political risk surrounding the Kingdom made us curious: why the obsession with Saudi money, beyond the obvious that they write monster checks?

The answer turns out that it’s not just that the country can write large checks, it is that they are willing to write large checks to one of the most heavily levered companies in the world. SoftBank — including its Vision Fund — has engorged itself on massive levels of debt in order to increase returns — often at the expense of operational stability.

First, take the Vision Fund. According to PitchBook, most of the fund is underwritten by SoftBank itself ($28 billion), Saudi Arabia ($45 billion) and Abu Dhabi ($15 billion). But, the fund has also been on a huge debt binge in order to juice returns. As reported by Mayumi Negishi and Phred Dvorak at the WSJ:

Around 60% of the money promised to the Vision Fund by investors other than SoftBank takes the form of debtlike securities that earn a 7% fixed return annually. That is an unusual structure for a fund that backs young, unprofitable companies, where it is unclear when—or if—investors will make money.

On top of that, the Vision Fund and its affiliate have been borrowing money: They had around ¥636 billion ($5.6 billion) in debt as of the end of September, up 28% in the past six months, according to SoftBank filings. That money has partly been going to pay the returns promised the funds’ investors, the filings say.

And SoftBank is planning to have the Vision Fund borrow an additional $9 billion or so to boost the fund’s returns further and make more investments, Mr. Son told The Wall Street Journal after the press conference.

That’s not insane by any measure, even if the use of debt is relatively unusual for venture firms (unlike in private equity, where debt is very standard). The Vision Fund invests at a much later stage than most startup investors, and its term sheets — from what I hear — are heavily laden with economic terms that give SoftBank huge downside protection. It’s hard to believe that the GPs could invest $98 billion and not find at least $14.6 billion in returns to cover their debt repayments.

Here’s the thing though: SoftBank is the second largest LP in the SoftBank Vision Fund, and that contribution itself is also funded by a balance sheet that is staggering in its debt load. 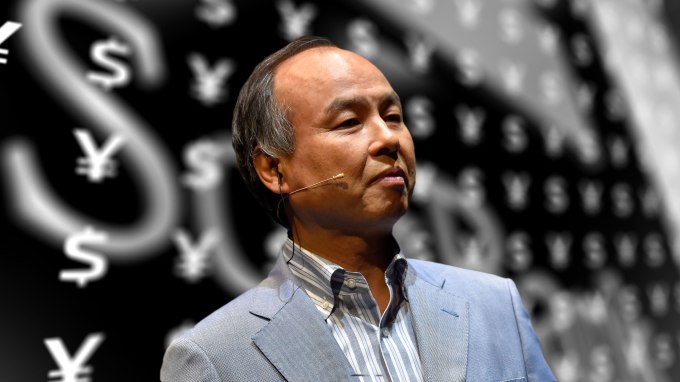 Earlier this week, SoftBank announced profit levels that blew analyst estimates out of the water, reporting a profit of $6.2 billion in the company’s second quarter. The stock rose despite broad unease from investors around the company’s deep ties to Saudi Arabia and the continuing political fallout of that situation.

The bigger number, though, is sitting on the liabilities side of the company’s balance sheet. As of the end of September, SoftBank had around 18 trillion yen, or about $158.8 billion of current and non-current interest-bearing debt. That’s more than six times the amount the company earns on an operating basis, and just slightly less than the public debt held by Pakistan.

And though SoftBank’s sky-high debt balance tends to be a secondary focus in the company’s media coverage, it’s a figure that SoftBank’s top brass is well aware of, and quite comfortable with. When discussing the company’s financial strategy, Softbank CFO Yoshimitsu Goto stated that the company is in the early stages of a transition from a telco holding company to an investment company, and as a result is “likely to be perceived as a corporate group with significant debt and interest payment burden” with what is “generally considered a high level of debt.”

The hope for the company is that as investors recognize it as an investment business, the way SoftBank’s creditworthiness will be evaluated will change and it should be able to operate with more flexibility around leverage levels as Bloomberg’s Shuli Ren outlined in a feature on the company earlier this year:

For acquisitive globetrotters, being labeled an investment firm means having a lot more room to issue debt. In January, Fosun was upgraded one level by Moody’s, which didn’t seem at all concerned by the Shanghai-based company’s debt pile. It noted only that Fosun had no liquidity issues considering it held 61 billion yuan ($9.6 billion) of cash and marketable securities against 35 billion yuan of short-term liabilities.

As SoftBank becomes an investment company, leverage is no longer an appropriate measure, CFO Yoshimitsu Goto was cited as saying in a cover story in the Nikkei Asian Review last weekend. SoftBank’s Vision Fund and Delta Fund mean the firm can use debt without damaging its balance sheet, he said. In effect, SoftBank has already started to resemble the likes of HNA, using complex instruments and margin loans backed by its shares in Alibaba Group Holding Ltd. to finance more startup acquisitions.

But the lack of an “investment company” label has never stopped SoftBank from pursuing aggressive expansion with a highly levered balance sheet in the past. SoftBank has in fact had a deep history of operating at debt levels well above industry averages, dating back to the mid-1990s, following the company’s 1994 IPO.

At the end of 1998, SoftBank had around $5 billion in debt on its balance sheet and was using three times as much debt to finance its operations versus equity. The company continued to use debt as a means of financing an ambitious M&A strategy, which included the $20 billion acquisition of American telco Sprint in 2012-13, which led to the downgrade of SoftBank’s credit ratings to junk by both Moody’s and S&P, where they’ve remained since.

Junk-rated credit still didn’t stop SoftBank, with the company spending around $32 billion to buy U.K. chip designer ARM Holdings in 2016. At the end of that year, SoftBank had a debt balance of around $125 billion.

Then in early 2017, SoftBank announced plans for its Vision Fund, which would effectively allow the company to continue making sizable investments despite having an overstretched balanced sheet. According to the Financial Times:

A person involved with the fund’s creation says the structure was designed to address the challenges of placing major bets on technology start-ups. While traditional private equity funds often borrow against their purchases to boost their firepower, Mr Son would likely struggle to raise leverage against companies that have little to no cash flow.

The creation of the Vision Fund led S&P to revise the credit rating outlook for SoftBank from stable to negative. And as the Vision Fund has lined up commitments to borrow another $9 billion, some lenders have started to view SoftBank’s strategy with more caution, such as Bank of America, which decided not to provide $1 billion in the financing arrangement two weeks ago due to concerns that the lending terms were too risky.

Again, SoftBank’s reliance on debt isn’t new, with some Japanese investors and bondholders even applying a “Masayoshi Son discount” to the company’s securities. And SoftBank has proven its ability to operate, and operate well, under such conditions, surviving and growing substantially over the past two decades amidst several market turnovers and crises.

Nonetheless, when a company is operating with such high leverage, risks are amplified and even modest bumps in micro and macro conditions can have serious implications for investors, startups and the broader investment ecosystem.

Danny had 8 hours of meetings yesterday and read about one page of any of this, despite his best intentions: