We already knew that the electronic scooter space in Europe was heating up, with Berlin’s Tier announcing today it has raised €25 million in a round led by Northzone, and rumours circulating that Delivery Hero founder Lukasz Gadowski has ventured into the space — all within the context of U.S. companies Bird and Lime recently expanding to Europe. However, now it seems that Balderton Capital could be about to make its move by investing in Sweden’s VOI Technology, another e-scooter rental play with pan-European ambitions.

According to multiple sources, the London-based venture capital firm is gearing up to lead a round in Stockholm-based VOI. Two sources say the amount being invested is $15 million at a pre-money valuation of between $35-40 million, while another source said it could be as much as $25 million. Separately, I’m hearing that with multiple term sheets on the table and the pace at which the company is growing, VOI is actually considering increasing the round to $50 million.

Other VC firms thought to be participating are Berlin’s Project A, and Netherlands-based Prime Ventures.

To date, VOI has raised just shy of $3 million in seed funding from Vostok New Ventures.

I contacted Balderton Capital earlier today, but haven’t heard back. A spokesperson for Project A also declined to comment. Neither Prime Ventures or VOI could be reached at the time of publication.

What is particularly noteworthy about Balderton’s entrance into the e-scooter market is that three of the other “big four” London VC firms have already made U.S. investments in the space. Index and Accel have backed Bird, and Atomico has backed Lime. 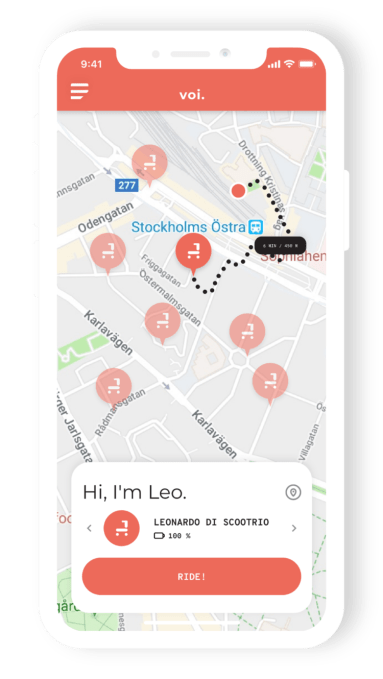 As I noted in my earlier Tier funding story — which marked the biggest financial backing for a European company in the space to date — this isn’t stopping a number of European investors getting busy trying to create the “Bird or Lime of Europe,” even if it is far from clear that Bird or Lime won’t take that title for themselves (which is obviously the bet being made by Index, Accel and Atomico). The general sentiment of European VCs steadfastly trying to nurture a European born competitor is that they don’t want to see the e-scooter rental market be rolled over by the U.S. in the same way that Uber rode in and knocked out many local players.

With that said, the worse-case scenario in the eyes of many of those same VCs (and those VCs standing on the sidelines not participating) is that Bird or Lime will eventually acquire the most promising European e-scooter company or companies. In other words, the downside is mitigated somewhat, failing an outright home run.

Meanwhile, Tier, VOI and Gadowski’s Go Flash aren’t the only European born e-scooter startups with pan-European ambitions. There’s also Coup, an e-scooter subsidiary owned by Bosch and backed by BCG Digital Ventures that operates in Berlin, Paris and Madrid. And just two month’s ago Taxify announced its intention to do e-scooter rentals under the brand Bolt, first launched in Paris but also planning to be pan-European, including Germany.

Not that everyone is convinced. Two early-stage European VCs I spoke to today said they hated the space. “I just don’t understand, isn’t it going to be a massive bloodbath?” said one of the VCs, before questioning the total number of rides we could see in Europe annually. “I just don’t see how Europe is going to produce multiple multibillion dollar businesses in this space. I think the market size caps it.”